Consider the Calgary Herald Article "Housing Bubble Talk dismissed by board". In the article they cite some numbers which imply market strength.

A strong February market could mark the beginning of what could be a return to a more traditionally active spring market.
Last month, the board reported 1,035 detached, single-family homes changed hands within the resale housing market in Calgary's city limits -- an increase of 36 per cent compared to January.

There was also a 43-per-cent jump in the number of resale condos sold.

February is described as a strong month because of an increase of sales, even though this increase follows a normal historical pattern.

Contrary to this pattern, January actually decreased from December, therefore an increase from these levels is not surprising.

This is why I believe it is important to look at seasonally adjusted data to clearly see market trends. I would describe sales in February as "fairly weak" but not as terrible as the rate of sales during the financial crisis. 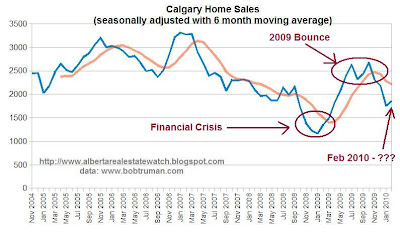 Although the number of new listings moved up by nearly five per cent last month, the two-month total for January to February is still down nearly four per cent compared to the same period last year.

Here they are compare listings to the previous year. My take is that listings are increasing at a faster rate this year than last. 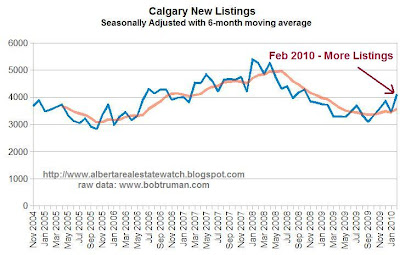 "The market is tightening and we are seeing a moderate rise in the number of competing offers, but Calgary's market remains in a healthy, stable position," says Scott. The average price of detached homes hit $458,254 in February, an increase of four per cent from the previous month and up 10 per cent from a year ago.

On the condo side, the average selling price was nearly unchanged from January at $282,880 -- and up five per cent compared to last year.

"There is a spring in the step of Calgary homebuyers as we get ready for the spring market," says Scott.

The market has gone from "fragile to fervent" in 12 months, she says -- adding she foresees strong activity in the spring as consumers continue to take advantage of low mortgage rates and overall afford-ability prior to expected rate hikes in the second half of this year.

The market went from fragile to fervent and has now moved back down according the seasonally adjusted sales/listing ratio. 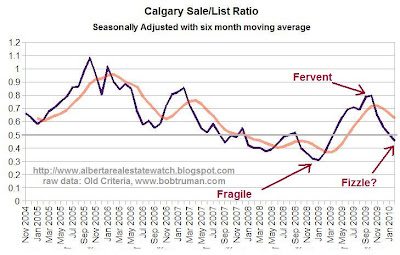 A few things the article failed to mention about the increase of sales due to higher rates. If people are buying earlier than they would have otherwise to beat rate increases then one would expect a similar decrease in sales afterwards. There was no mention of the temprary nature of these low interest rates (standard term of 5 years) and their effect on asset valuations.
Posted by BearClaw at 12:24 PM

That is a well thought out post. I really appreciate the time you took to analyze the data.

I find the Herald's "reporting" of real estate news to by confusing at best.