Single family homes under construction in Edmonton continues to increase as a delayed response to the recovery between mid-2009 and earlier this year. The result of this will be a higher supply of single family homes going into a downturn. While the level of construction is still below that of the boom it could be a concern given the condition of the resale market and continued (relative) weakness in migration and employment.

The level of condos under construction remains low as it took longer to shake off the glut from the boom. That's probably a good thing. However, the number of condos completed and not absorbed remains high. 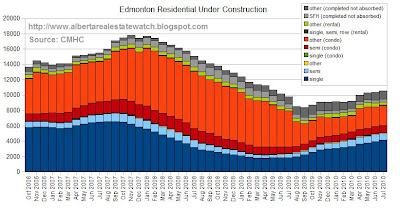 I expect single family starts to fall off a cliff decrease substantially later this year as resale becomes more competitive due to falling prices. Also people are going to be reluctant to build if it means unloading a property in this market.
Posted by BearClaw at 11:13 AM