Edmonton: What has driven the boom?

In many American markets the run up in prices was almost entirely attributed to the total absence of lending standards and speculatively mania.

I think the situation in Alberta is more complex. Speculative mania played a part in the boom for certain, but this combined with inflation and actual economic growth brought the peak housing prices.

Below I took Edmonton prices back in 1999 and tried to apply a rough guess of economic growth contribution and inflation to each year to see where average detached prices would end up in 2007/2008 in the absence of speculative mania. From the EREB archives in 1999 the average detached house sold for $133,442. Now "Justified Appreciation" here is an abstract number of how much economic growth contributed to appreciation assuming all participants were rational. I made an rough guess on this value and added on inflation each year to see where prices would trend. I started at $150,000 at 1999 assuming that prices were irrationally low during this time period. Since I make the case that markets can be irrationally overpriced then I also gave merit to the idea that market can be undervalued as well. These are all rough estimates, but i think it gives some tools of how to look at a market besides "The economy is hot so prices will increase" or "It was a speculative frenzy so prices will crash".

In Edmonton the average detached price peaked at $426,000 in July 2007 and was at $381,384 this June. Assuming these wild guesses reflect reality the difference between the price above and actual price would be due to "speculative mania". This would include watching too much flip this house, or that Ty dude from Extreme housing Makeover, lax lending standards from the CMHC and this woman and unrealistic expectation of future appreciation. Breaking apart the components shows a possible breakdown of each contribution to appreciation between 1999-2008. Note that as prices fell and inflation marched onward the speculative mania component has shrunk since the peak. 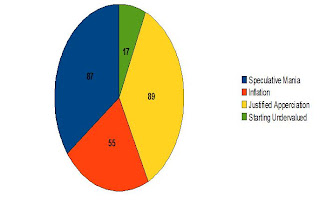 This is as close to a forecast I will post. Generally the theme of this blog will be to point out distortion from the real estate industrial complex and the media. I'm not an economist.
Posted by BearClaw at 6:35 PM

consider this Siegle estimates half of Invis's Calgary clients in the last year chose 40-years, and zero-down mortgages

but we will see

You sound apologetic when you say your not an economist. I think you should be proud of this. Your graph looks a little cutoff on the side...are we missing some data the way it is formatted?

In 2003 a house was purchased for $195,000 in Edmonton and in 2007 that same house was selling for $450,000.
That is a quarter of a million dollars profit in 4 short years!
Now you know why speculation was running rampant.
That is like winning the lottery if you pulled the sell trigger at the top of the pyramid.
Your graph of a rocket to the moon shows it as well. Anybody with half a brain knows that graph has to fall back and a pretty conservative guess would be at least half way.

Even assuming inflation was running at 2% from 1999-2008 with starting prices at $133K we would end up at $159K. So you scenario of 145K for Edmonton would not include any of the economic growth that has occurred and with less than 2% inflation. Its just factual that inflation has been running higher and economic fundamentals (wages, rents, population growth) have been positive during this period.

However even after including generous inflation and economic growth and assuming prices started at an undervalued state, Edmonton still comes up $50-80K short.

$425K for a trailer in the middle of nowhere. Have we gone mad??

I just wanted to point out that this post was sort of rough. Really there are so many variables and I don't believe in any sure way to measure "fair value" for real estate.

Rent vs. buy is fairly good but it really only works for individual properties. Even then there would be other factors to consider such as expected future rental income, condition of property etc...

I think Fort McMurray can fall too. The idea of "the economy is booming so real estate prices cannot fall" becomes a self fulfilling prophecy until it isn't.

Really I think it would take a booming economy to have a trailer valued at 300K as well, or 250K.

It would be interesting to see the ties between real estate and local government in Fort mac and how they decide to release lots for building or to throw a trailer on. Hmmm....

ft mcmurray is a tightly controlled market
residential lots are sold by the provincial government they are usually sold to friends of the government..although i too agree with a price fall due to changing credit markets

Iv'e seen trailers up there in Fort Mac listed for $600,000. Totally absurd. The guy making 6 figures a year has to work 6 years before he can begin to put any money in his jeans. LOL

this bubble is much bigger then the 80,s bubble

in nominal value real estate has always been a terrible investment

the noise from realtors makes my brain numb..they have done so much damage to people that i fear that they have gone to far this time

we are in a massive bubble
if blogs existed in 1980 what would you have called me if i had said prices would fall 50%.. no doubt you would call me a nut or worse

all bubbles end the same way