The first tale is that of "stabilizing prices" as described in the Calgary Herald article Calgary home sales continue decline, prices hold steady

Calgary's residential real estate market in the first half of this year has been marked by declining sales, increasing listings and stabilizing average sale prices compared with a year ago.

Stabilizing is present tense and indicates that prices are continuing to stabilize. Taking a year-to-date average of prices 2008 is comparable to 2007:

However looking closer look at the trend prices are decreasing compared to a year ago not stabilizing. From CREB stats

Note that median prices, prices are down over 7% YOY. Remember when the median was supposed to be the stat of choice?

Another tale is the notion of things picking up in the fall from Ed Jensen.

In a news release, CREB president Ed Jensen said the sales numbers "reflect that more buyers are finding a home that fits their family's needs. As we move into the summer months, it's an excellent time for buyers to capitalize on the wide selection of homes, rather than waiting for the fall when things start to pick up again."

Fall with winter are typically the slowest seasons for sales. So its totally mystifying to predict thing starting to pick up then. See the chart below from CREB which i roughly highlighted September to December. 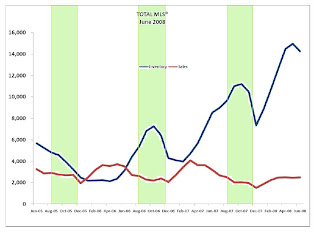 This clearly demonstrates that Ed Jensen is creating a false sense of urgency to promote sales instead of presenting information in a useful way.

"The inventory could normalize very quickly," says Jensen. "There are several double listings out there -- people who have listed both their existing home and their new home -- and if one sells, they would pull the other one off the market."

First there are no numbers available to what extent this is taking place and how this differs from historic norms. Even if this is correct it is not all positive for the market. Generally people with two homes are more motivated. They would be motivated enough to ignore their preference of moving into the new home to increase their chance of selling by listing both. I would argue that in some cases this could be considered speculation. For example boomers that instead of downsizing now have two full-sized homes.

There is another good read regarding the Calgary Herald, Ed Jensen and fairy tales posted on the Calgary Bubble Blog

From Edmonton Marc Perras from the EREB is also creating a sense of urgency:

“Some buyers seem to think that further discounts are possible and are delaying their buying decision unnecessarily. The market finds its own level and has varied within a three percent range over the last six months. REALTORS® have buyers who are staring down the sellers but sometime soon someone will have to blink.”

This is another tall tale which implies that Edmonton in a lull as buyers wait down sellers. This is not a new idea and has been argued before. From Carolyn Pratt, EREB President 2007 EREB Archives.

“Buyers have a large selection of homes to choose from and they are taking more time to make a
decision,”

Panicked home buyers were forced to make decisions quickly from a severely limited selection of houses and condos. At the end of the third quarter of 2007 buyers are more relaxed as they contemplate slightly lower prices and three times the choice of a year ago.

“Buyers, on the other hand, took their time selecting a property to purchase in the
hopes that prices would drop further.”

I have not seen once the argument that lower sales are the result of higher prices. You know ECON 101 stuff. This absence demonstrates a bias which is not surprising but should still be acknowledged. There is also a theme which is similar to Ed Jensen`s comments that buyers should be buying now. I don`t seem to recall this type of urgency in the normal market before the boom. This is trying to bring back the boom mentality of buying early to avoid escalating prices. However buyers should note that this time period was an anomaly and buying a home should be carefully considered in a normal market.
Posted by BearClaw at 8:18 AM

I read a Calgary statistic somewhere a couple of months ago saying that 42% of the properties for sale in Calgary at the time were empty. This would be partly because many people have bought or built elsewhere prior to selling their previous home (assuming it would sell), and partly due to speculators who bought or built expecting to flip the property for a profit and now being unable to do so. So if even half of these empty homes are people who have committed to another property, then it is possible a reasonable percentage of THOSE may have both properties up for sale. As for actual percentages, who knows. The affect of this on the market looks like contributing to a downward price spiral as people with multiple mortgages will have limitations as to how long they can sustain the cost of having homes sit empty. Those who are *forced* to sell become the sales that set the new price levels.

All the ridiculous priced houses in Calgary are going down. How is it that houses that should be around $180,000 are priced at $400,000? Who can afford that, even on a $90,000 a year income? All those realtor pimps await a rude awakening. And the people that work for the Calgary Herald are like prostitutes working for the realtors(pimps). Only a matter of time before reality sets in. God help those overextended.

Email that pimp Ed Jensen and tell him what a delusional fool he is:

Frig this article is so well written.