Quote of the year

2008 quote of the year goes to the chief economist of the Canadian Real Estate Association. The following statement appeared in the Calgary Herald regarding Calgary real estate. [emphasis mine]

"It's clear looking at the data that I'm looking at, that in terms of the prices, they've stabilized," he said. "Anyone expecting a continued decline in average price will be surprised and disappointed."

I think this takes the cake because it comes from the CREA's chief economist who makes assertions with such certainty without explaining to the public what data was used or how he came to his conclusion. The confidence was there without any reflection on what was said in the past.

Anyway I update the chart a had posted earlier this year. Enjoy. 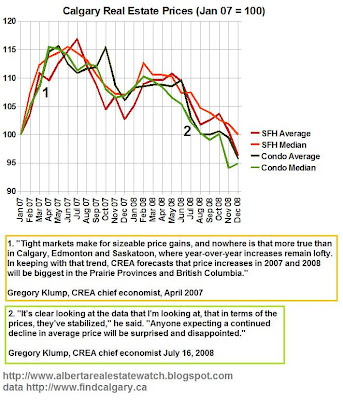 We're in the same boat in Vancouver. At around the same time as the Klump quote, the chief economist of the BC Real Estate Association said there was "no indication" of substantial price declines.

Today, prices are off 14.8 per cent. This is a $84,000 haircut for the benchmark home as compared to prices seven months ago.

bearclaw
at one time you had a link on one of your posts i think it was a CREN
link that showed hundreds of crap condos that were being held off of the MLS so as not to drive prices down
i cant find it..do you know where it is ?

Thanks for commenting! I read your best-of list and it was excellent. A lot of great material in Vancouver. I think you guys need a top 100. What about Ian Watt? Or Rennie holiday Christmas ad telling people not to engage in negative speculation. hahaha
I would buy a book of the Vancouver Housing boom and bust it will be historic.

I don't know if that site exists here are some related posts.

Bob T wants you to do 2009 predictions as he thinks that you're a joke (that's how he feels about you).

Why don't you prove him wrong?

I'd say that calgary/Edmonton will both bite the dust at a rate of -15% this year minimum. More if there's a torrent of desperate folks listing for the spring un-rush.

I find you name offensive. Get a new handle and stop trolling.

trumans attack on you
shows his desperation and points out that he is definitely in financial peril
hehejeje..laughter and joy as the the king pom pom real estate shamster goes down the finacial drain
at least he wont clog up the cross country ski trails next year

Blast from the past said...

“calgarians are the stupiddest idiots in canada”

“just keep the emotions out of it”

“goddam hamburger flippers at it again”

“when you know someones got your goat..and you cant find the words to fight back
1..discredit and call him a liar
if that dosnt work
2..throw insults at him/her
and if that didnt work
3..throw false allegations at him/her”

“faggots all should be lined up and shot. they don’t deserve a house to live.”

“All blacks and foregnners should go back to where they came”

“bums and hoeless people should get a job”

“what a loser! sucker. idiot.”

“most of them are short fat middle aged wannabes”

“bob censoring his comments again. what a piece of shit.”

“your a worthless human being”

“ha ha. you don't own anything. the bank owns you bitch lol.”

“i think sheldon has been fair with his blog”

“shit-even the title denotes r/e is overpriced. man, you're dumb.”

“dont screw around
your a ramen or a screwed
spec-buyer”

realtors as a rule are un-educated
and have no marketable skills
we are supposed to be better
if your a stupid buyer..whos to blame..not the realtor
you are
mothers of future realtors abort your babies

“the creb has difficulties calculating the math”

“first off..i have always said DONT blame your realtor if you over paid for your house”

“your mother should have aborted”

“the ramen marketing machine is so full of shit, they believe their own crap.”

“neither you or i can influence the choices of others..so relax its a blog”

“the future is good..not for you
but for me and my family”

“hehe.. your gonna lose it all”

“suck it up little boy”

“radley is an idiot”

“i have always respected bob truman
he knocked me..i knocked him
but he offered much good information..and won
many friends”

“now..if findcalgary.com would just disappear..panic and confusion would set in and prices would free fall”

“you realy are stupid”

“i mean realy..why are they so stupid ?”