Listings have been running higher because the price sellers think they can get is inflated. In addition to low interest rates the market improved in 2009 because sellers understood that they needed fairly substantial discounts off peak price and buyers could find better value (relatively).

It no surprise that listings have increased as asking prices have. Consider a benchmark house I have previously covered. Approximately 1700 sqft 2-story house with double attached garage and bonus room in a newer south east Edmonton community of Ellerslie. In October 2009 I did a comparison of one that was priced at $374,900. I noted that the price to rent ratio was high at 220, but with the financing available at the time the buy vs. rent was closer. 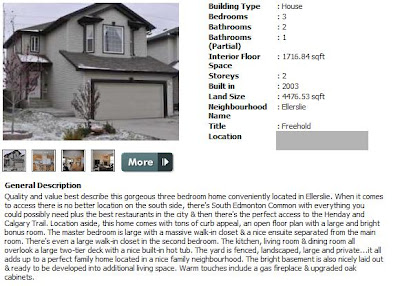 Now the least expensive house that matches the same criteria is this $410,900 1701sqft two story. In this environment people are coming out of the woodwork to sell. 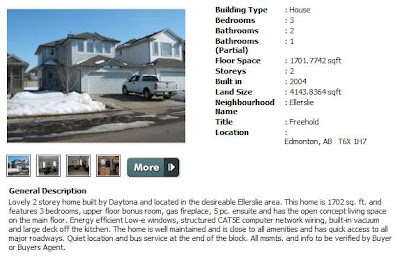 There are other similar houses asking more. Asking prices in general will need to fall to move the inventory that is accumulating.
Posted by BearClaw at 9:48 AM

Each day it seems more and more clear that prices again have swung too high to maintain a supply/demand balance. Inventory is up about 15% year over year in Alberta and heading higher. Some charting I have done indicates an upper resistance level for Old Criteria median at $380,000 and a lower resistance level for Old Criteria at $345,000. Current old criteria median price is $373,000, which is fairly close to the previous upper price resistance level, which fits with your explanation of listings increasing due to increase in price.

What are the odds ?

For the past two months, the mortgage arrears rate in Alberta has been falling. Mortgage arrears are mortgages that are more than 3 months late in payments. I believe that mortgage arrears are not only a function of who starts falling into arrears, but also who recovers from being in arrears (by reducing other disposable expenses and perhaps finding a job), AND who the banks dispose of and decide to foreclose upon. The foreclosure rate can be affected by the speed at which our judicial system can handle the case load and also the banks. Since CMHC carries much of the risk associated with mortgage arrears in Canada, instead of the US system where banks are in competition with each other to foreclose, the CMHC has the chance to change the period over which foreclosures occur. Banks may wait until after the recovery begins before offloading properties that are behind in payments.

Alberta may be at the point now where they are clearing out bankruptcies faster than people are falling into arrears.

Anyways, just my two cents considering I have been unable to post on the Edmonton Housing Bust website.

the author of the edmonton housing bust website has an ego to feed, lots of comments about his sex life and what have you, who cares.

his ego needs to be fed, that's why he writes that he authors "Edmonton's most widely read real estate blog" again who cares, his blog is for the uppity ups, you know the university crowd, hes a schmo.

he doesn't get it, that its all about joe six pack.

then again radley, you do make strange comments.

shell scotford laid off 800 on thursday

Kevin...……the wife and I had some “renters fun” this past week as our lease renewal is up and we are haggling with our landlord.

Applied for a mortgage just for laughs, last time was in 2003 IIRC, not buying, F _ _ K NO we’re not stupid, just having fun for our internal household market research project….and it is a great bargaining tool tp use against the “tools” who are called landlords.

Who said there wasn’t a bank sponsored bubble ?????

If you check Kijiji alone there are almost 4000 apartments for rent. Many are condos that people can't sell which were pulled off MLS, and even a few still on MLS. There seems to be thousands of empty houses & condos people are trying to rent. I am worried the Realestate market may collpase here in Edmonton

In 2009 what factors do you think contributed to the lower support level? Will they be there for the next downturn?

High construction costs and incomes are two factors that could legitimately prevent prices from falling to pre-boom levels. However higher interest rates, net migration and demand exhaustion may pull us below the previous 2009 bottom.

The bust blog may be the most widely read, but that doesn't make it the best. ;-)

That amount doesn't suprise me. With your downpayment and income I doubt you are much of a default risk even with the higher mortgage. It is still a bad idea.

"There seems to be thousands of empty houses & condos people are trying to rent."

Kijiji has basement suite ads, people looking for roommates, duplicate ads and vacancies for June 1st or later. Even availabilities May 1st likely from people moving to another location not because of an empty suite.

I don't see a huge supply of rentals or new constructions contributing to a collapse. I think other factors will cause some type of medium term decline.

Are you blocked?! That's weak.

Just cross post the exact comments here to highlight the injustice. I may even do a post about it.

check this out Bear