At the peak of August 2007 there were 6,528 single family homes under construction in Edmonton. Exactly two years later that surplus was reduced to 1,986 and has since rebounded to 3,169. SFH starts have jumped significantly (shown in blue) but have not reached the level of the boom. 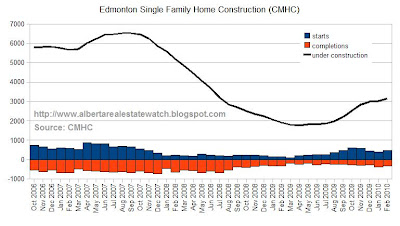 The next chart shows all types of construction including housing that has been completed but not absorbed by the market. With these factors considered the recent bounce in new detached homes has been offset by the continued decline in condo construction. 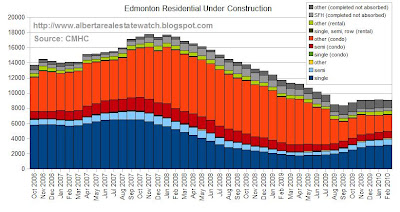 At the peak in February 2008 there were 7,730 condos under construction in Edmonton (orange). The last month available, February 2010, this has been reduced to 2,220. Over the past two years the glut of condos constructed during the boom has mostly been completed and absorbed. There remains an elevated number of condos not absorbed but that has reversed slightly as completions slowed (dark gray).

There are several changes coming to the market soon; however, the relatively low level of construction compared to the boom may limit the severity of the next downturn.
Posted by BearClaw at 8:32 PM

What I have noticed is there is a relationship between oil prices and construction supply in the MFH market. Basic economic textbook theory would indicate that as energy costs associated with transportation increase, both urban planners and development industry will move forward with urban models that provide better cost/benefit. I think going forward there will be a rise in market share of MFH relative to SFH. I'm not sure what the exact ratio will be, but I'd bet it's under the 2008 levels, and more than the rest of the decades historical average.

What CMHC publication is this data from??

The data is from monthly reports called Housing Now.

I'm sure there is a correlation but I think affordability, security and maintenance (for boomers) are bigger factors right now than transportation costs.