A blog was uncovered at House Hunt Victoria that used statistical magic to indicate a seller's market was developing in Victoria. A Victoria Realtor calculated months of inventory* to be 3.5 in July even though it was a over 7.5 months in June. Not likely. It appears he uses a smaller set of data for inventory while adjusting a larger set of data for sales. House Hunt Victoria explains what is wrong with this figure:

It's really hard to follow because he's all over the place, but essentially yes; he's narrowed the current active listings down to a subset of SFH in certain municipalities and then used the market-wide sales data averaged over the first 6 months of the year, lumped pending and completed sales together to further confuse the data and then done the math to come up with 3.5 MOI but called it MSI (a term that also seems to come out of no where).

But I will be the first to admit I could be wrong in my interpretations somewhere as it is very difficult to follow his explanation/calculations because they are all over the place. I'd love it if he would clarify, but he seems to be too busy having his best year ever in 2010 to respond appropriately. 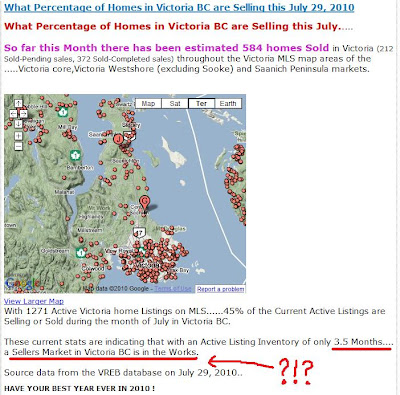 *Months of Inventory is the time required to sell total inventory at the monthly sales rate
Posted by BearClaw at 7:10 AM

bear, theres some graphs towards the end of this article that was published today that holds some very good information concerning the levels shadow inventory in the U.S. its really shocking
http://www.nakedcapitalism.com/2010/07/links-73110.html

wrong link sorry, this one is correct
http://housingstory.net/2010/07/28/the-aftermath-of-the-global-housing-bubble-chokes-the-world-banking-system/