In the last post Radley commented on the low population growth in Calgary from the 2010 census.

That's quite surprising considering the entire province had a rate of increase three times higher at 1.60%. See Alberta population report report for Q1 2010 I covered in this post.

The census has yearly statistics on the number of residential dwellings and population from which we can calculate a ratio to measure the amount of supply. 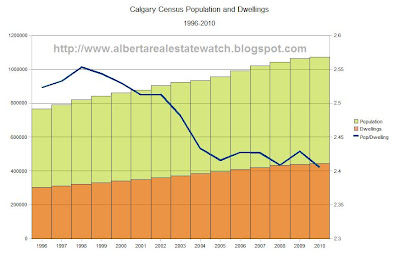 This chart shows population, total dwellings and the ratio of people per dwelling. This ratio was 2.54 in 1999 and fell sharply to 2.43 in 2004. The economy was doing well during this period letting Gen-Xers establish households. In addition to this there was low interest rates and the start of a housing optimism after many years of stagnation. I was surprised it was fairly steady throughout the boom years (2005-2007). During this time there was a lot of construction but also a lot of population growth. 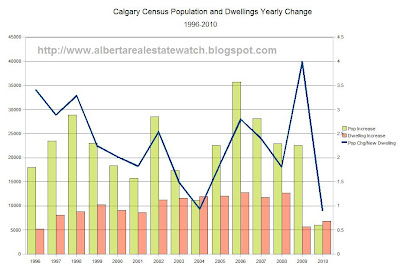 This chart shows the change of population, and number of new dwellings each year. It looks like there was some reduction of supply in 2009 as population increased while construction dropped substantially. This reversed in 2010 as slow population growth lead to more supply on a relative basis.

Housing Analysis uncovered a Bank of Canada report on housing supply. It was full of incomprehensible formulas but had this comment on supply across the provinces:

Using aggregate data for Canada, our model suggests that the housing stock was overbuilt at the end of 2008 by 2 per cent. This gap is likely to close slowly by the end of 2018, given the projections of the key variables in the model. Provincial models indicate that there was likely overbuilding by the end of 2008 in Saskatchewan, New Brunswick, British Columbia, Ontario, and Quebec. On the other hand, the level of housing stock in Nova Scotia, Manitoba, and (surprisingly) Alberta fell back below what was consistent with fundamentals, after having risen above the level a couple of years earlier.

I wouldn't be as bold to say supply is below trend but it is difficult to make the case there is a large construction glut in Alberta. Having said that weakness in the housing market could persistent if migration remains low (or negative).
Posted by BearClaw at 7:05 PM

Thanks, I think I had read last year in a TD Economics report somewhere that they had said that Alberta was overbuilt substantially.

This obviously contradicts the report that you had mentioned.

I know at least in Calgary, that there was a crazy amount of condo construction in 2008 and I think there is still some condo overhang. The recent census numbers, seem to indicate that there would be a large decrease in sales volumes.

I still strongly disagree with many of the local bears in that there is a big problem in the mortgage market.

As for Edmonton, a good friend of mine did mention to me in confidence that major builders there were reassured by the city of Edmonton's permit dept that they foresee great statistics with regards to number of permits issued therefore, steady number of homes built there for the short/mid term.