Alberta population statistics were released today for the first quarter by Alberta finance here. Interprovincial migration was slightly positive for the quarter following two quarters of net loss to other provinces (mostly B.C.). The inflow from the rest of Canada is still down considerably from the boom and international migration remains strongly positive. 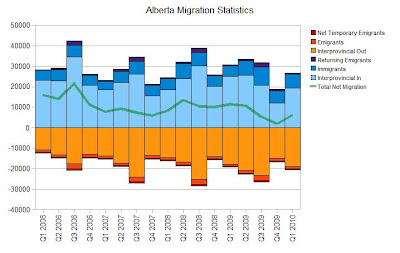 Natural population growth is relatively high compared to other provinces and resulted in a total population increase of 12,987. CMHC's Housing Now reports there were 5,651 starts during this same period. Without going into more detail it is difficult to judge whether this is out of line. It seems high with only 2.29 people per start. However it neglects housing that has been replaced and these starts include smaller multi-family dwellings. There does not appear to be rampant overbuilding but I would guess there will be a slowdown in construction due to weaker prices and migration.
Posted by BearClaw at 8:56 PM