Some thoughts from the unicorn ranch... 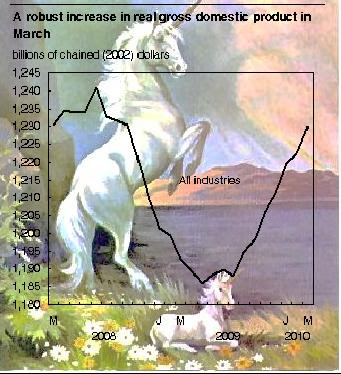 Housing is starting to drop nationwide in Canada and there are serious financial events that will have consequences for some time. I do question whether we are entering a double-dip recession imminently and this "unicorn ranch" post is a tongue in cheek way of presenting a little optimism. Let's shake things up.

First consider this editorial on the CMHC, stressing the crown corporations risk to Canada.

The 20 per cent hit that CMHC could take would be more like 25 to 30 per cent. There are significant expenses in disposing of repossessed property — taxes, utilities, insurance, real estate commissions, legal fees, and so on. I would estimate that CMHC (which, in effect, is the federal government) could wind up $125 billion in the red.

This would blast an enormous hole in our government's finances. Canada would be put into the same category as the other prolific spenders. Which is where we should be. We are merely postponing the inevitable.

Not a chance. Even in a pessimistic scenario where a drop in housing values and spike in foreclosures puts CMHC underwater it would not approach the order of magnitude claimed. The problem with the $125 billion figure is it assumes that CMHC will cover all losses in housing in its entire portfolio.

However, CMHC only pays out when there is a foreclosure and even in a nationwide drop of that magnitude it will only be a fraction of total insured mortgages. In Canada arrears are at 0.44%; it is true this number is low due to a robust market where selling is an option for the distressed. In Alberta there has already been a fairly substantial decline in home prices combined with a deterioration in the employment picture. With these factors in play the arrears rate peaked at 0.75% (for now).

For the benefit of the doubt let's assume a more brutal nationwide housing decline where the arrears rate increases drastically to 5% for insured mortgages and all of these arrears go into foreclosure. In addition to this also assume CMHC eats all the losses. I believe this is overly pessimistic in terms of level of foreclosure and the CMHC would inevitability deny some claims, like recent fraud uncovered in Calgary where BMO took the losses. Using these assumptions anyway the losses for CMHC would be:

The article claimed the CMHC had $9 billion in equity, but perhaps in this case the government may have to intervene depending on how liquid that equity was at the time. So instead of a fiscal emergency for Canada its more like the cost of a G20 summit or a gun registry. Funny, I have seen this pop up in discussion forums but the factual inaccuracies were never addressed.

Just in case anyone missed it recent GDP numbers indicated a strong rate of economic expansion.

Expressed at an annualized rate, real GDP grew 6.1% in the first quarter after advancing 4.9% in the fourth quarter of 2009. This compared with a 3.0% first quarter rate of increase in the US economy.

It has been argued that a unnaturally strong housing market is solely responsible for this. In my opinion, housing played a role, but the recovery has been too strong and broad based in Canada to have that be the only factor.

Stats Canada released employment figures for May. Summary: employment increase. Full time up, part time down. Private sector up, self employed down. Although it is important to keep in mind this is only a single month, it was blockbuster nonetheless.

Following large gains in April, employment rose by 25,000 in May, the fifth consecutive monthly increase. The unemployment rate was unchanged at 8.1%. Since the start of the upward trend in July 2009, employment has risen by 1.8% or 310,000.

Full-time employment increased by 67,000 in May, partly offset by losses of 43,000 in part time. Since July 2009, virtually all employment gains have been in full time.

So to the dozens of readers who frequent this blog, did you enjoy your field trip to the unicorn ranch today?
Posted by BearClaw at 12:15 PM

Wow, insightful take on CMHC. I had not even thought of it like that before.

It looks like good news to me. There'll still be some bumps on the road out east and probably in Vancouver, but I'm optimistic.

Re CMHC, the higher qualifying standards for insured mortgages will help buffer against any downside.

CMHC will protect lenders from downside, but not buyers. But I do agree the loans here were not as terrible as in the states which will lessen the downturn. There is less risk of mass foreclosures in Canada which contributed to a vicious cycle stateside.

So the downturn in housing will slow overall growth but I don't think it will lead to another recession.