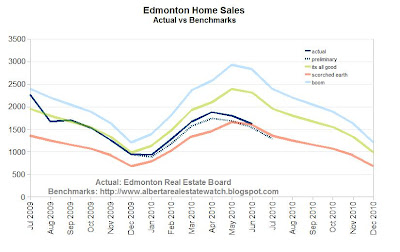 Preliminary numbers showed a drop in sales as expected for this time of year. However that leaves us about the same as June where sales were terrible. I added the final numbers to the chart as well. 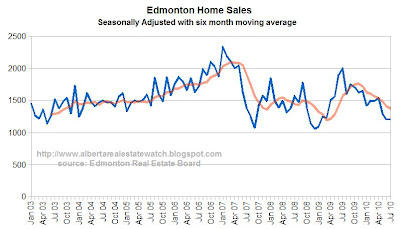 Seasonally adjusted sales are at a similar rate as the worst six months of the financial crisis. I estimated July sales to be 1378, or 6.5% higher than the preliminary number. 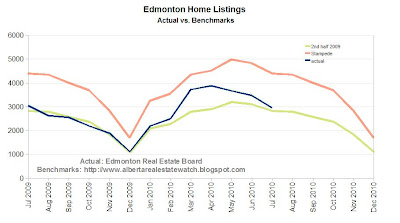 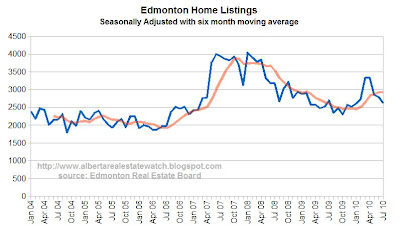 New listings fell as in July and inventory declined from 9,406 to 8,892. This can be expected but the decrease was more pronounced than usual for the month. 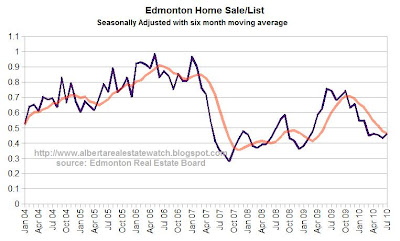 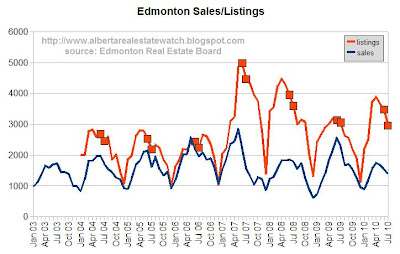 Sales to new listings ratio remains low but improved slightly due to the decrease in listings. The market conditions are beginning to show up in price with the SFH median falling to $360,000, down $10,000 from May.
Posted by BearClaw at 5:43 AM

I came across this program I thought might be interesting as well:

Alberta Housing and Urban Affairs is contributing between $28,000 and $33,000 towards the purchase(repayable upon sale) and a five year mortgage subsidy ($200/month for 5 years) for a minimum of 58home owners.

I do think there is a need for more affordable housing; near market hand-ups rather than hand-outs, is a way to leverage the governments money and is the most cost-effective way to mitigate other costs.

I hate realtors. I bought a house that was way too big with granite and stainless, but now its going down in value. Why do realtors take advantage of hard-working people? I agree with Squidly, they should have their arms and legs cut off.

My banker screwed me royally by gaving me a mortgage that my income barely qualified for, the a__hole I hate him.

I bought a whole bunch of stocks and they're crashing. I hate stockbrokers for doing that to me. I hate public companies that sell stocks to people.

My plumber ripped me off when he installed fixtures in my bathroom. The pipes leak and the toilet won't flush. I hate the b__tards. They get paid way too much.

Radley,
I think subsidizing rentals is a better way to go because it is a more direct way to supply shelter and doesn't have near the transaction costs or market risk. Even still there are rental options available I think there are more appropriate places for funds.

CC,
deleted spam. been on vacation.

theres now a new comment tab second in from the left..click on it and should arrive at the spam blocking page..now the adventure is yours

back to never i should say

My thoughts are a rental supplement, while it does help the senior, or low income disabled person. It also shifts the demand curve.

My thoughts are to help make housing more affordable, it is best to try to increase supply by the creation of new housing stock.

This allows for attainable home ownership that benefits the individual, as well as the market as a whole.

I also think that allowing investors to buy new housing construction is also beneficial to supporting housing supply, with the proviso that there is a very high likelihood of the lender being paid back.

Another strategy to increase housing affordability, would be to reduce the amount of land speculation. i.e. a transfer tax on land, or allowing development on crown lands through an auctioning of leases with the stipulation that if construction does not begin within a certain timeline that they lose the rights to the lease.

Finally, governments at all levels should look at linking land use choices to transportation and other infrastructure costs. The benefit would be an entire system that is a more cost-effective and productive use of resources.

why do you need to delete well-presentd comments? Simply because they embarrass you? Are you that low on self-esteem?

You want to call him/her to task because you want to accuse him/her of lying, twisting the truth etc… simply because he/she is a realtor and you don’t like realtors; but yet you don’t have the nads to actually come out and say it because you are fearful you won’t get the support of other posters.

Wow a little more respect from me for DA for sticking his/her neck out over and over regardless of support he/she would get, or lack there of.

I guess I have to conclude that you don’t post based on your true thoughts, you post more about what you think the general group will agree with or not."