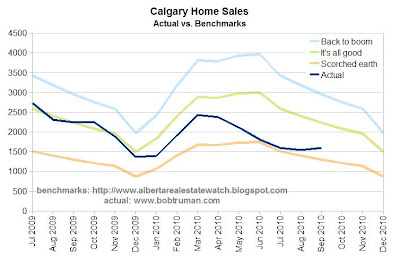 For the last couple of months sales have been fairly steady. This has resulted in a shift away from the "scorched earth" benchmark as sales are expected to fall this time of year. 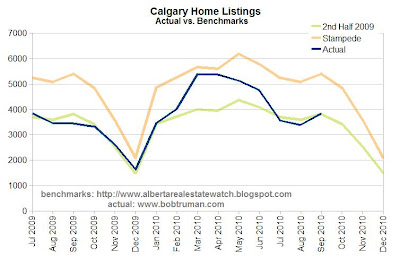 New listings are tracking closer to the rate of the 2nd half of 2009 after spiking dramatically earlier this year. 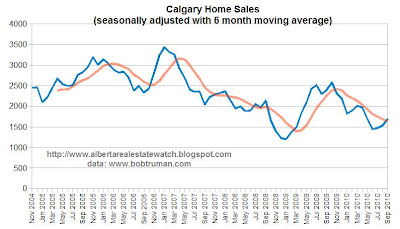 Seasonally adjusted home sales bottomed in June and have increased since then. Even with this increase sales are low by historical standards. 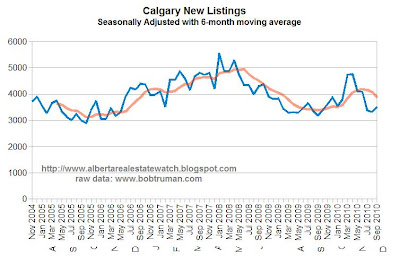 Seasonally adjusted new listings remain well below the rush of earlier this year or in 2007/2008 as people are more reluctant to sell in a tough market. 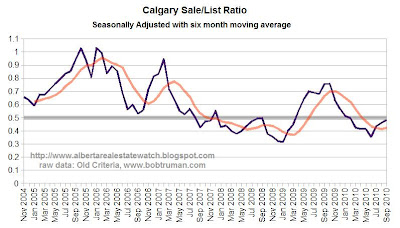 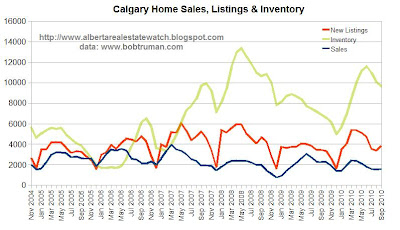 Although new listings have declined inventory is moving more slowly. The level of inventory combined with still historically low sales means that prices must be competitive to sell.
Posted by BearClaw at 5:45 AM

Since you sorta took to defending CMHC in a previous post I was wondering if I could ask you something........

In light of what the banks have just said (and I think the numbers are really double what they are publicly stating, but they are too scared to say so) do you think that the government should tell CMHC to cut back on their mortgage advances by 12.5% at a minimum to protect the taxpayer ?

You know, the folks like you and me that are on the hook for this mess ?

BTW when are you in town, I still owe you and your S.O. a dinner and some drinks ?

It is true that a drop in values will do two things.

1. Increase the rate of foreclosures
2. Decrease the amount recovered

I think the CMHC should always plan for a nationwide drop in home prices, they are an insurance company after all. With their underwriting standards and reserves they are capable of withstanding *some* sort of price drop. I don't know at what point they would become insolvent.

I think the recent changes to CMHC were good but not quite enough. Decreasing the amortization to 30 years and making the qualifying posted rate of 5.39% apply to all loans would be good incremental changes. I don't think this would have much impact on the market.

Increasing the DP to 10% or 15% would lower their risk but its not clear it is necessary. At least make the 5% come from actual savings and maybe make the bank chip in another 5%. I think these changes would reduce CMHCs business considerably (not necessarily bad).

Since CMHC has tightened regulations the private insurer Genworth has increased market share. So some people think there is a legitimate business there.

-don't know about Calgary. I'll send you an email.

At least they don't insure these loans anymore. 100% financing of 2 unit rental properties. Amortized over 40-year combined with new to Canada program.