"Old Criteria" numbers have been posted by Bob Truman today for Calgary. 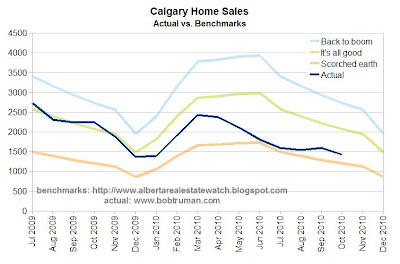 Sales fell as expected this month. They have maintained a level slightly above scorched earth after rebounding this summer. Sales are still pretty bad, but they could be (and have been) worse. 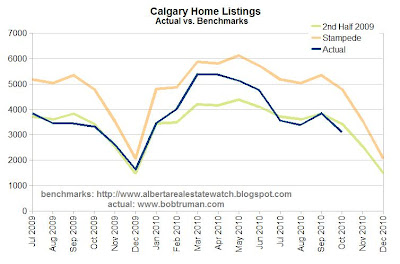 Listings dropped slightly faster than what would be expected and are now below the seasonally adjusted constant rate of the 2nd half of 2009. 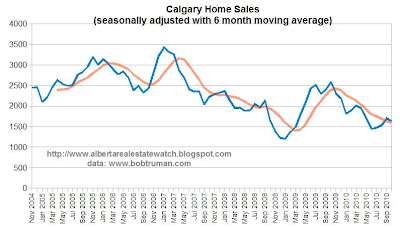 Seasonally adjusted sales are at fairly low levels but have broke through the six month moving average on the upside. I am not a fan of technical indicators so all this tells me is that so far the sales slowdown has been slightly less brutal than during the worst six months of the financial crisis. 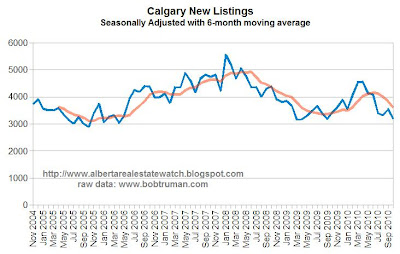 New listings are down considerably after spiking earlier this year. 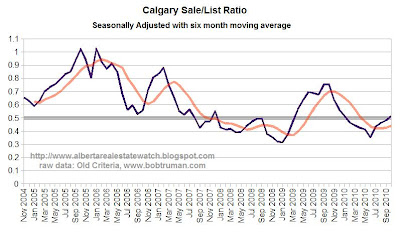 The seasonally adjusted sales to new listing ratio broke 50% in October. While a 50% indicator has been shown to be the transition point between falling and rising prices I should add a few points of caution to this.

1. Prices have seemed to lag this indicator somewhat with rising prices earlier this year even with a sub 50% ratio. So some amount of price declines are probably still baked in.

2. This improvement has been more due to the drop of new listings as sales have remained fairly weak. Some are skeptical of using new listings as a market indicator. The main criticism (I think) is that the number includes original listings and re-listings so its hard to judge how much new supply is added. I think if someone re-lists it measures difficulty and/or motivation to sell and an original listing measures new supply. Either way the higher the number the weaker the market will be assuming a constant sales rate.

3. Even if the ratio was an accurate gauge of where prices were will go this is one month of 50%. So unless there is further improvement this only indicates potential stability. 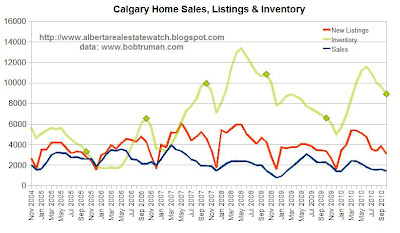 And finally a look at sales, new listings and inventory over the years.
Posted by BearClaw at 7:04 PM

I saw an interesting chart on RBC's long term affordability. Of note, it points out current affordability, the historical highs and lows. It does not include the period in 1982. I thought you might be interested... Thanks for the update on sales to new listings ratio.