This post will take a look at some ways banks and lenders are taking in some easy money in Canada.

Right now there is a fairly hefty premium built into 5-year fixed mortgages and with the new qualifying rules it is the only option available to marginal buyers. If buyers choose a variable mortgage or a short fixed term they have to qualify for the posted 5-year rate. This rate now appears to be arbitrarily high compared to 5-year government bonds and this will move buyers towards fixed mortgages.

Even the spread on the discount rates appears elevated. Lenders are moving marginal buyers into fixed rate mortgages and collecting wider margins for it.

See the chart below to compare the fixed 5-year mortgage to the 5-year government bond. Before the financial crisis (2000-2006) the posted mortgage averaged 2.42% higher than the benchmark bond. The premium has been above 3% for about a month. 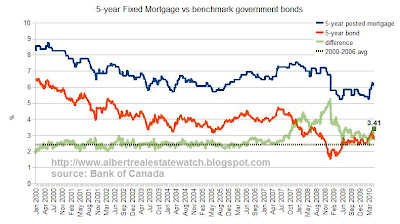 Read the article from Canadian Mortgage Trends about this situation.

It makes one curious about the logic that went into the final decision. Is there a real threat of sustained 4.35%+ higher rates? Or did the powers that be set the bar overly high to herd people into 5-year fixed mortgages—which just happen to be more profitable?

Maybe the latter is just too cynical a thought…

My opinion is that the restrictions to variable mortgages is a good thing and should be applied to discount 5-year fixed mortgages to avoid this problem.

Must be nice to collect an additional 0.25% off indebted Canadians, which the banks are doing since the prime rate remains inflated long after the financial crisis faded away. Normally the prime rate tracked the Bank of Canada's overnight target rate with a 1.75% premium. However back in 2008 they decided to withhold part of the central bank's rate cut. See article: Canadian consumers shortchanged on rate cut.

"Continuing market turmoil has steadily driven up the cost of borrowing for financial institutions. This makes it challenging to match the Bank of Canada rate cut at this time,"

The prime rate remains 2% above the overnight rate even now the crisis is over (from the bank's perspective). See article: TD TD Bank blows away analyst estimates as Q1 profit soars to $1.3 billion

The bank's net income rose to $1.3 billion in the quarter, essentially doubling the $653 million it earned a year earlier, helped by record earnings from its domestic banking operations.

It joined CIBC (TSX:CM) and Bank of Montreal (TSX:BMO) in beating Bay Street estimates, with only Royal Bank (TSX:RY) falling slightly short of expectations even as it posted a $1.5-billion profit.

To illustrate this additional 0.25% premium see the chart below with the BOC rate, prime rate and difference between them. There were the occasional spikes resulting from a small delay to move the prime rate, but this is the first sustained difference going back 10 years. 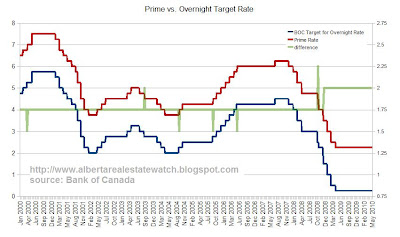 Canadian mortgages are typically renewed every 5 years or less. With the recent mortgage changes to decrease amortization from 40 to 35 years, require 5% down and qualify on 5-year posted rate (not to mention future price decreases) there will be borrowers who fail to qualify at renewal. Since a change in lender requires requalification while renewal does not, borrowers have no choice but to renew at the rate given to them. Good deal for lenders who can set price arbitrarily. Another unintended consequence of loose lending. Again, from Canadian Mortgage Trends:

The kicker is that you can’t change lenders at renewal without requalifying. Therefore, if you don’t have 20% equity at maturity you could be stuck in another 5-year fixed mortgage (possibly at your existing lender’s “rack rate”). If you instead want to switch to a variable or 1-4 year fixed term, your debt ratios will have to fit under the much stricter government guidelines at that time.