Gregory Klump, chief economist of the Canadian Real Estate Association, is telling Canadians to relax when it comes to housing. Read the report found on Mike Fotiou's blog and then watch this video.

The report argues the diversion in home prices versus income is part of a normal housing cycle that will unwind with stagnate prices and rising income. The chart used to back up this premise shows these variables over time. Initially, I was surprised the gap between them appeared small enough to support this theory. 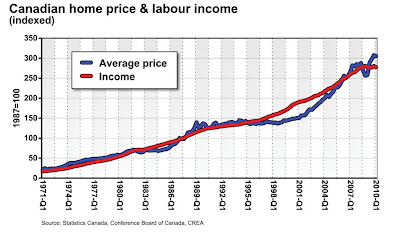 It turns out that the income statistic used here hides the difference between these two variables over time and conveniently implies a less severe downturn. Between 1980 and 2005 the index for income increases from roughly 55 to 225. An increase of over 4 times is definitely not typical over this 25 year period characterized by flat real wages.

I suspect the data used here is wages and salary and supplement labour income from statscan which matches what is charted above (between Q1 1997 and 2009). This is total income of a growing labour force and therefore will increase faster than individual incomes over time. 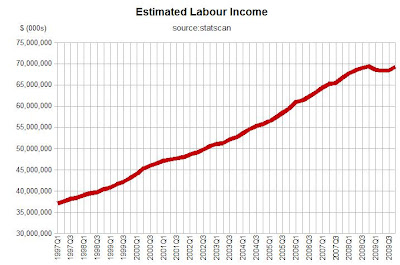 A reasonable source would be full-time, full year median earnings because it represents typical earnings over time, not aggregate earnings. Total labour income also hides the fact that virtually all wage growth over 25 years has been from top earners. Median income has barely changed in real terms for 25 years, moving from from $41,348 in 1980 to $41,401 in 2005. I converted to nominal using CPI tables from statscan.

After this adjustment median income between 1980 and 2005 increased 2.4 times, much less than the 4.2 times of total labour income. I have added this series to CREA's chart to illustrate the difference below. 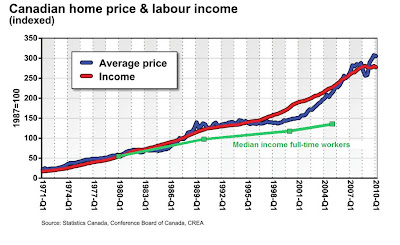 What is astounding here is even after selecting this convenient data for the study he has the nerve to criticize others who have looked into this relationship.

Warnings of a U.S.-style home price correction in Canada are unfounded. Such warnings are typically based on a limited analysis of the historical relationship between national average home prices and income which ignores Canadian housing market cycle dynamics.

It doesn't matter how sophisticated your analysis is when your data sources are distorted!
Posted by BearClaw at 12:20 PM

This is a really great post. Good fact finding.

Kevin @ edmontonhousingbust, grow some balls and post a ticker on your site

you wont do it, your a realtor exposed, a legend in your own mind

What's a ticker?
Why are you so angry?

angry, no way bear, kevin stuck a sharp stick into all the alberta blog authors eye, claiming supremacy due to alexa rankings is comical, please allow me to stick a sharp stick back into his eye, LOL

his blogs great, but the boasting is realtor talk

2 rules to live by

1..modesty is the key to success

2..never insult your woman, especially publicly, they're more important than we think....made that mistake once

a ticker is whats at the end of my blog roll on the left hand side.

House prices are based on comparable local properties, so using national stats is about as useful as comparing the price of strawberries in California to the number of baby seals clubbed last year.

As much as I am for clubbing baby seals I have to disagree.

If someone is buying or selling right now then price is mostly determined by local comparables.

National stats are useful for establishing *general* trends, or to identify risks. I don't mean to suggest that future price is guaranteed to return to the income multiple we had in 1980, as there are other contributing factors. For instance I think interest rates will stay low so the multiple may continue to be higher than the 80s. However the current gap appears large enough to warrant a price correction.