After a slow start in January sales have picked up in February. Even with this increase they are still below the pace set in the 2nd half of 2009 shown in green in the chart below. It will be interesting to see how much the new mortgage rules will slow sales after March 17. I believe the impact of this change has been overstated because it is a marginal reduction of the size of a mortgage allowed and only effects those who were going to their affordability limit with the maximum amortization. (It is a positive change long term and if you are a buyer rushing to get a 35 year am - don't do it. Get a shorter amortization later when you can afford it.) 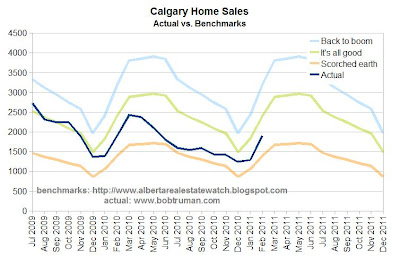 New listing have ramped up at the start of 2011. This stat will be important to watch over the next few months. Will we have a higher than normal surge this spring similar to last year? 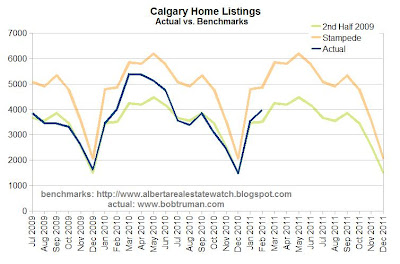 Seasonally adjusted sales have remain higher compared to late last spring but nowhere near the pace of the boom of 2006-2007. 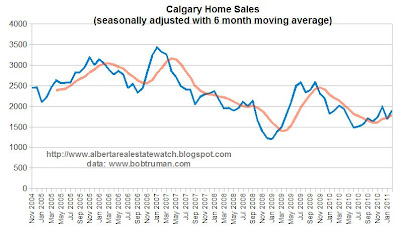 Seasonally adjusted new listings have increased consistently since reaching a low in October 2010. 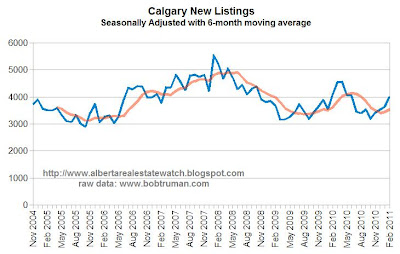 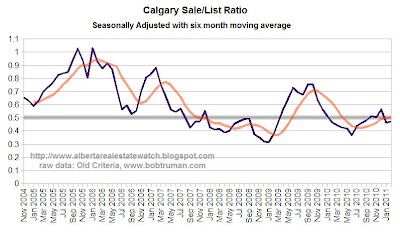 Since December the median price (Old Criteria) has increased from $342,500 to $357,250. I believe that sales mix and seasonal factors contribute to this so to give further insight I hope to add seasonally adjusted price charts shortly. The same goes for total inventory as well which has increased from 6,056 to 7,517.
Posted by BearClaw at 9:04 AM