From the latest round of radio ads on the REALTORS Association of Edmonton's site:

Just like the swallows return to Capistrano every year after winter the buyers return to the Edmonton real estate market after summer.
It happens every year like clockwork and we expect it to happen again - Marc Perras

This is simply a fabrication by Marc Perras and is not supported by reality based arguments.

Look at this sales chart again from the Edmonton Real Estate Blog. Compare June, July and August numbers with those of September, October and November. With a few exceptions fall tend to be slower than summer. The only thing happening like clockwork is desperate spinning from the REALTORS Association of Edmonton. 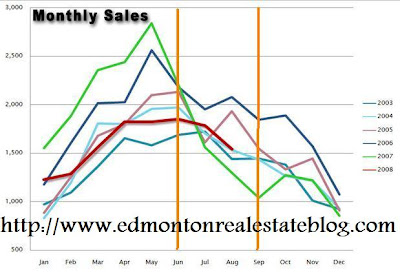 But we usually see softer prices in August because people have so much on the go. That pattern held true this August as the average residential price dipped by about 1.8% from the previous month.
So prices fell slightly as expected...

He then goes on to say how prices are expected to rise in the fall. Using their own numbers I determined the % month price changes for August and September going back to 1990 (from REALTOR Association stats).


Generally September has had higher price drops than August. And the drop of 1.8%, while not devastating, is worse than average.

Also remember when the price drops were supposed to only occur in the second quarter? This statement I covered in a previous post.

Q: Should I buy now or wait?

Perras: "I think it's a great time to buy now. If we're going to see any softening in prices, it's going to be in the second quarter, which is right now. This kind of inventory is going to thin out as we get into the fall."

I don't mind bullish arguments and would expect them from REALTORs. But when they totally make stuff up that is not supported by the numbers they need to be called on it.
Posted by BearClaw at 11:07 AM

At least lawyers have some form of education.

Keep up the good work!

Ditto, I'll second that complement, you always have good information and have done your research Bearclaw.

Q: Should I buy now or wait?

Perras: "I think it's a great time to buy now. If we're going to see any softening in prices, it's going to be in the second quarter, which is right now. This kind of inventory is going to thin out as we get into the fall."


He's been spewing the same speel since the beginning of time. Once a sales agent, always a sales agent and always trying to sell you on "it's the best time"
LMAO

Hey Bearclaw,
You're putting a lot of effort into your blog, and providing a lot of great information. We also put a lot of effort into creating charts and summarizing the stats on our blog. If you're going to use our charts, at least credit the source and keep the watermark on there. If we could prevent others from taking the chart from your blog I wouldn't mind as much, but now the whole world can take our work from your blog and use it as their own. Thanks...Sara at edmontonrealestateblog.com

I did credit your blog and there was no watermark on the original version of the sales chart, I did not remove it.

hey sara open up the books so we can make our own charts
you want to hog the material
and we have to be force fed the info..open the books or quit whining..what are you afraid of

once again from the edm bog

63% sales to new listings ratio! Wow! 1496 sales for far this month! Lets just say....that's not what Sheldon and I were expecting. One thing we were expecting was a price drop, and the average prices have slid to $323,206 for the month so far (down from $329 at the end of August) just like last September.

that flat out lieing

maybe the monthly and weekly stats cover different areas/housing types and could explain the difference.

thats the whole point
who in the hell knows what it counts ?