The August report is here. Sales were only compared to 2007's devastating numbers and not to other more "balanced" years. While its true that sales are up over 2007 consider some previous statements regarding sales:

“Near record January sales indicate that housing sales will remain strong in the Edmonton area as buyers and sellers adjust to the new pricing levels,” said Marc Perras, president of the REALTORS® Association of Edmonton.
Feb 5, 2008 (21% drop over 2007)

Actually in the forecast released at the beginning of the year Marc Perras predicted sales to drop slightly. The actually number of sales this year will certainly be less than his forecast.

With the high inventory, demand was strong with residential sales near traditional volumes.
April 3, 2008 (34% sales drop over 2007)

This is a false statement. May sales were in fact below those of 2004. See previous post.

Don't get me wrong. Number are numbers and there were 18% more sales this August compared to last year. I just don't buy the spin. To EREB 2007 was off limits except when comparing to record low sales. This chart is probably the most enlightening way to look at the sales figures stolen from the Edmonton Real Estate Blog. It is laid out so it is easy to compare sales from each month to the last several years. 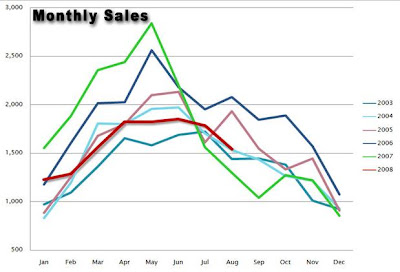 See the red line? Thats the sales surge the Edmonton Journal is referring to in this article: Edmonton home sales surge, prices dip.

There is still more. Marc Perras had to comment on price as well.

“Housing prices typically rise slightly through the fall,” said Perras. “We expect that the strong sales this quarter will support rising prices as we approach year-end.

This reminded me of a previous statement which I debunked in this post.

"I think it's a great time to buy now. If we're going to see any softening in prices, it's going to be in the second quarter, which is right now. This kind of inventory is going to thin out as we get into the fall."

Ed Jensen's report for Calgary was less brutal and focused more on sellers. He still managed to call the Calgary market stable and had the same buyer's market charts.
Posted by BearClaw at 5:50 PM

We all know they don't.

So, Is Perras a liar?

Or is Perras stupid?

edmonton sales resemble the need for some people to use maximun dosages of viagra..sales are impotent

EREB just changed the stats, even links to yesterday's report have been changed. unbelievable

"bad" pointed out the Edmonton Real Estate Blog used the wrong data for the second sales chart. They are using total instead of residential sales that they normally use. The chart with 1541 sales in this post is still correct.

your patience is now being rewarded

It must have been torturous watching that bubble expand
you needed balls of steal not to buy in to it, and most importantly, you had to really believe in yourself and your natural instincts.

Congratulations to all that that hung on.