Official numbers of Edmonton were released today by the REALTORS Association of Edmonton. I made up some historical charts, seasonally adjusted charts and benchmarks similar to what was done for Calgary in this post.

The first chart is non adjusted historical data. These charts are similar to Calgary except it looks like listings in Edmonton have been even more volatile. See the listings in red went ballistic half way through 2007 and have come back close to normal since. 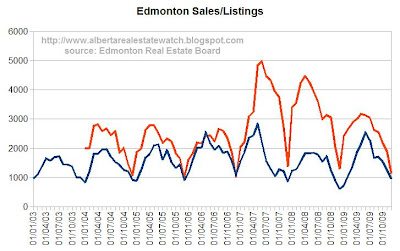 The yearly pattern is fairly clear in the above chart and using the same method as the previous post I created charts that have been seasonally adjusted. See how new listings peaked in the second half of 2007 and have come down ever since. This may have recently bottomed similar to the trend in Calgary where the six month average has formed a bottom. The 2010 benchmarks I use are marked points on the six month average. 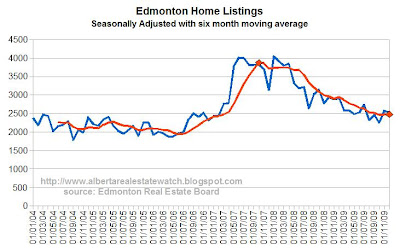 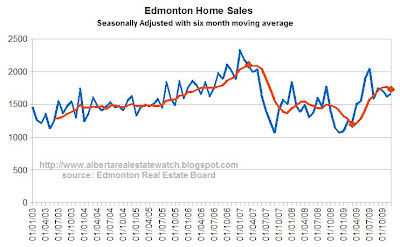 These benchmarks are shown as dashed lines in the charts below. We will see how 2010 progress by updating the actual values in these charts. The adjusted sales/list ratio over the last 6 months in Edmonton has been 70% and 69.5% in Calgary. So for a balanced or declining market sales will need to drop below and listings above the green benchmarks. 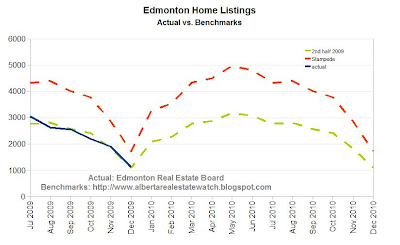 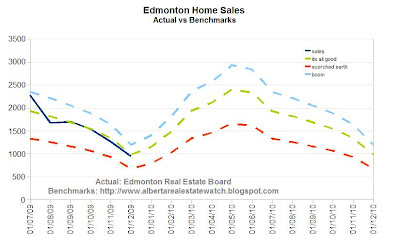 Next I will post seasonally adjusted sales/listing ratio but that is enough charts for today.
Posted by BearClaw at 9:04 PM

I expect listings to start increasing as price starts meandering upwards. To me, the listings look like both a technical bottom on the charts, but that is substantiated by where prices have been going in the last six months as well.

I had predicted that listings would drop as prices dropped (whereas the bear consensus tended to be that listings would boom as prices fell due to bankruptcies). I believe that there are subtle yet extremely important differences between the Canadian and US market, most importantly was the level of subprime borrowers. I also think bankruptcies will continue to rise, but the biggest contributing factor by far for a future rise in new listings will be the price component. Any hidden inventory that was in play before will come back into as prices start to trend back up again. Another factor that may come into play in the future in a big way is affordability and investability, as rates go up more people will have a tendency to sell as the gap between renting and owning widens. However, I believe this risk may not really impact the market for another two or more years as rates come up more substantially.

I also think it's important that one realize it can be one year for a single family home to be built including purchasing the land, designing, getting construction financing in place, receiving city approval, constructing and marketing. The process for multifamily homes is even longer, maybe 4 years long. I think the construction industry needs to focus on reducing current inventory levels, but it also needs to be looking out several years as well and beginning designing for new projects.