So it is a new year and we should expect sales to ramp up in spring. Over the past few years it has been difficult to differentiate between an actual change in market activity and what is due to seasonal factors. In this post we will find what the seasonal component in monthly sales is and from that determine some benchmarks to compare 2010 sales against.

Below is a chart of Calgary home sales over the past 5 years from Bob Truman's site and a centered 12 month moving average. 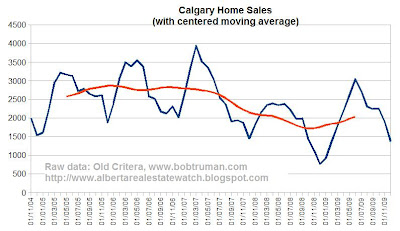 Next is a table of seasonal adjustments for each month. This is done by determining the ratio of actual sales and the centered moving average and taking an average for each month. For example the December ratios are marked below and taking the average we can expect December sales to be 62% of "normal" based on seasonal factors. The method is described in detail here. 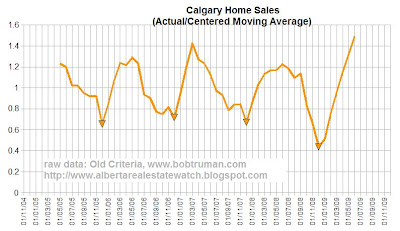 
This factor is "normalized" and applied to the original sales numbers to get seasonally adjusted sales. Also plotted is a six month moving average. 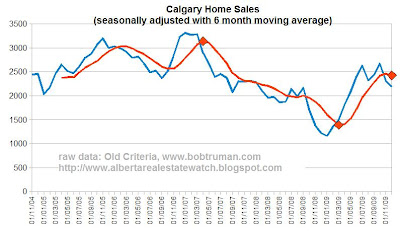 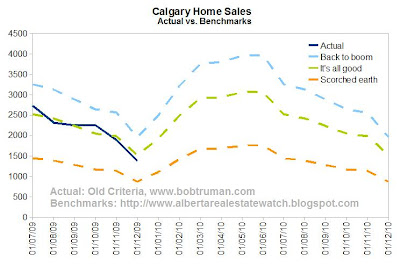 I will post the same charts for Edmonton when the official sales numbers are available.

Radley commented on new listings so I included similar charts to cover that angle. New listings was at least as important to the 2009 recovery as the increase in sales. One of the benchmarks for new listings in 2010 is a seasonally adjusted rate equivalent to the last half of 2009. This represents a relatively low level of new listings and for a market downturn to occur this will need to increase. The other benchmark is the first half of 2008 where sellers were stampeding to the exits. 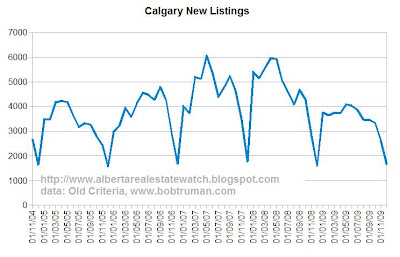 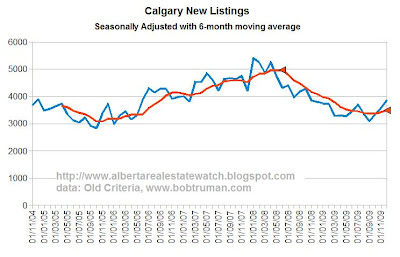 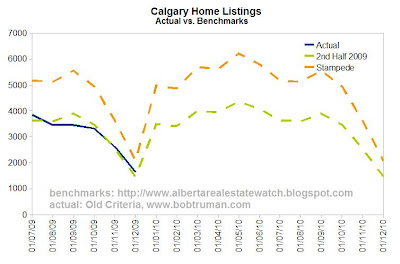 What I think is interesting with the market today is I would categorize sales rate as about on par with what could be expected given demographic demand, however it is the relative low levels of new listings that is actually putting some upward pressure on the market currently.

The current sales to new listings ratio of nearly 100% for SFH in Calgary is way too hot. (I assume a 50% sales to new listings ratio is required for a balanced price market). With this in mind, and given that inventory has come down considerably as well, even if sales fall 15%, and new listings rise 15%, we could still see prices up year over year in 2011. As prices go up, I expect the market will yield more listings (higher propensity to sell) due to less favourable investment metrics, and any speculative supply should resurface with higher prices. I also think it's reasonable for sales to fall from the current seasonally adjusted rate due to current high ownership rates, indicating less demand for housing going forward.

I also think it's important that the market look at not only demand, but supply as well. I get the impression from many of the bear blogs that they look at sales too much. For example, Kevin has said that "new listings is as useless as tits on a bull." The relatively lower level of new listings in 2009, compared to 2007-2008 is a large reason why the market ended up suprising the bears to the upside in 2009.

However, what I think is more important about the market is that people do bottom-up analysis as you have been doing on your blog, and instead of looking at whether the market is rising or falling, but looking at what is affordable and fits with long term objectives including saving for retirement, and allowances for safety factors, and assumption of increased interest rates. If you are renting, then you have to look at the current and expected future cost of rent, compared with complete carrying costs if you were to buy.

I added charts with new listings as well. I agree these were in an important story throughout 2009 and for the market to change direction these will need to increase.

The very high sell/list ratio for December is actually seasonal in itself, because listings typically fall more than sales in December. Seasonally adjusted the ratio is 56% as opposed to 84%.

How do you determine 50% sales/new listings leads to stable prices? I would have assumed it would need to be higher than that.

This graph shows the relationship between sales and new listings in Calgary:

I would infer that a best guess of 50% sales to new listings ratio is indicative of a balanced market (0% price change year over year).

Note that the current sales to new listings ratio is much too hot in my opinion. Quantitatively, the 84% sales to new listings ratio is indicative of strong price growth as illustrated by the right hand axis of the chart (not sure what that is on a seasonal basis). I believe if this were to occur for any length of time, that the finance minister, CMHC and bank of Canada will have to look at ways of reining in the housing market. This time though I expect price growth will be much more tempered than indicated on the chart due to higher vacancy rates, higher ownership rates, poorer affordability, and relative slack in the market that includes many MFH projects that have been stalled and can easily be restarted as soon as additional demand is required.

Rest of URL in case you can't read it:

With this in mind, I believe it would take about a 20% increase in new listings or 20% decrease in sales to balance the market (0% price change year over year).