The last charts of the series show the seasonally adjusted sales/listing ratio for Edmonton and Calgary. The sales to new listing ratio is a good gauge on how strong the market is and is closely correlated with price changes. A sale/list ratio close to 50% indicates a balanced market with stable prices. A ratio above 50% leads to a stronger market with increasing prices and below 50% will result in price decreases. Radley showed this correlation in Calgary in this post.

The reason for the seasonal adjustment is theratio has yearly patterns which makes it more difficult to interpret on a month to month basis. For example the historical non-adjusted chart for Edmonton is shown below. I marked points to show each December has a spike followed by a decline in January. 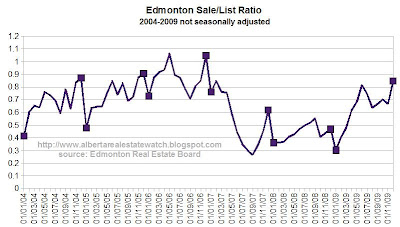 This drop is more due to seasonal patterns as opposed to the market deteriorating at the beginning of each year which is why the adjusted chart is more representitive of market trends. See the market downturn with the ratio dropping below 50% in June 2007 and then started recovery in 2009. The time periods below 50% are fairly closely correlated with when we experienced a declining market. 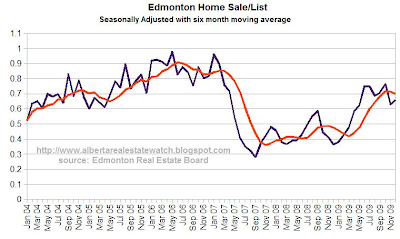 Calgary's charts is similar to Edmonton's except the decline after 2007 was more gradual. 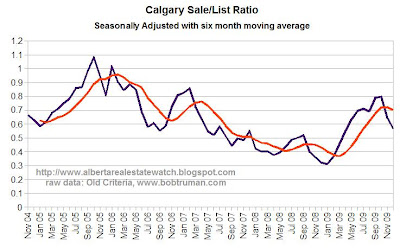 It appears the ratio has recently peaked in both cities. It is important to note that the sale/list ratio is an indicator of where the market is at right now and potentially which way prices could go in the very near future. They are not intended to predict long term trends.
Posted by BearClaw at 5:26 PM

Great post; it's interesting to see the seasonally adjusted sales to new listings ratio for Edmonton because it is not a market that I look at too often.

Very true that this isn't any of a predictor going forward, but just a real-time direction heading indicator.

Your posts are always non-biased and to the point. Very nice analysis and a refresher from the other blogs that have deteriorated into pools of vitriol and hate.

Keep it up! Even though you don't have many comments, you have a readership. The lack of comments is largely due to the thoroughness of your postings - there is difficulty poking holes in your information.

Thanks for that Lorax!