Bob Truman updated the Old Criteria stats for March 2011. With this I have once again update the trends new listings and sales adding inventory and price charts as well this month. Seasonally adjusted sales and new listings as well as benchmarks are explained here. 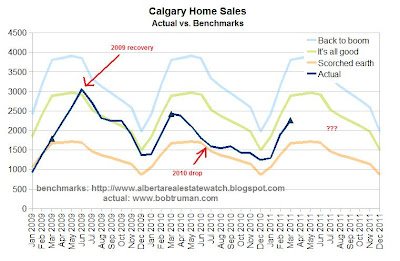 Sales are down year over year but are still above the pace of the financial crisis (shown in red). There are two ways to interpret this YOY drop.

1) In terms of sales the market was doing reasonably well last March and it was only in June and July where they deteriorated. So if we maintain this same rate seasonally adjusted we can expect an increase in yearly sales shortly.

2) Now that there are fewer available buyers due to tighter mortgage rules the rate of sales should decrease faster than normal, resulting in continued year over year sales declines.

April will be a relatively slow month due to a sales vacuum formed by the recent mortgage rule changes. However I believe this will only have a short term impact and sales would then recover. My guess would be somewhere above last year's rate but below that of 2nd half of 2009, shown by the green line. 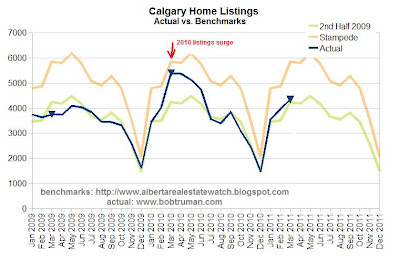 Listings are following closely the same rate as the 2nd half of 2009, shown in green. The low level of new listings is providing some support to the overall market which would be faring worse otherwise due to the low level of sales. 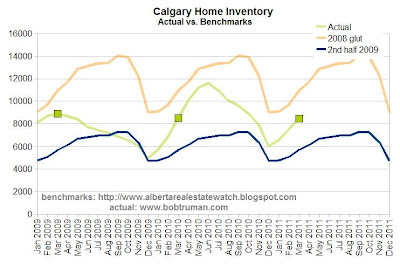 Inventory is about the same as this time last year, with only 0.6% fewer properties on the market. What is notable however is the difference in the rate of change between the first few months of this year compared to last. 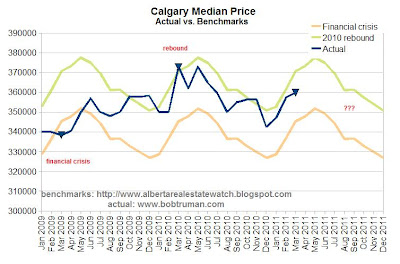 Median prices are down 3.5% from last March. 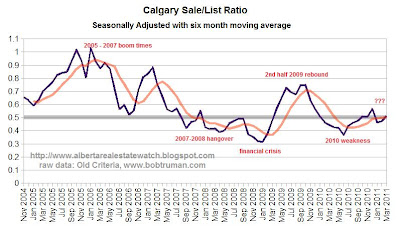 Sales to new listing ratio is hovering around 50% from low sales and new listings.

Update: The Edmonton Journal ran an article on Don Campbell pumping another boom: “I’ve studied this for 19 years and I have not seen this strong of a perfect storm before.” See previous posts: part 1 and part 2.
Posted by BearClaw at 1:40 PM